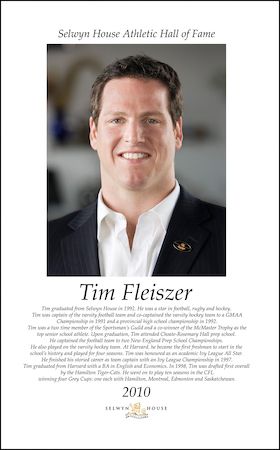 Tim graduated from Selwyn House in 1992. He was a star in football, rugby and hockey Tim was captain of the varsity football team and co-captained the varsity hockey team to a GMAA Championship in 1991 and a provincial high school championship in 1992 Tim was a two time member of the Sportsman's Guild and a co-winner of the McMaster Trophy as the top senior school athlete. Upon graduation, Tim attended Choate-Rosemary Hall prep school. He captained the football team to two New England Prep School Championships. He also played on the varsity hockey team. At Harvard, he became the first freshman to start in the school's history and played for four seasons. Tim was honoured as an academic Ivy League All Star. He finished his storied career as team captain with an Ivy League Championship in 1997 Tim graduated from Harvard with a BA in English and Economics. In 1998, Tim was drafted first overall by the Hamilton Tiger-Cats.

He went on to play ten seasons in the CFL winning four Grey Cups: one each with Hamilton, Montreal, Edmonton and Saskatchewan. 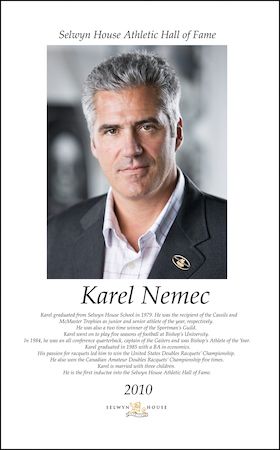 Karel graduated from Selwyn House School in 1979. He was the recipient of the Cassils and McMaster Trophies as junior and senior athlete of the year, respectively.
He was also a two time winner of the Sportsman's Guide. Karel went on to play five seasons of football at Bishop's University.
In 1984, he was an all conference quarterback, captain of the Gaiters and was Bishop's Athlete of the Year. Karel graduated in 1985 with a BA in economics. His passion for racquets led him to win the United States Doubles Racquets' Championship. He also won the Canadian Amateur Doubles Racquets Championship five times. Karel is married with three children. 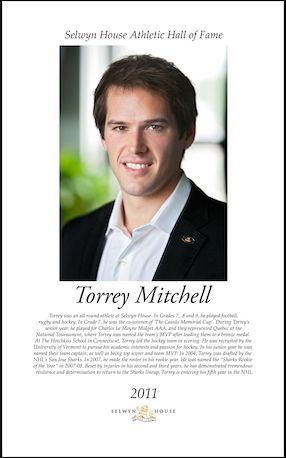 Torrey was an all round athlete at Selwyn House. In Grades 7, 8 and 9, he played football, rugby and hockey. In Grade 7, he was the co-winner of "The Cassils Memorial Cup'. During Torrey's senior year, he played for Charles Le Moyne Midget AAA, and they represented Quebec at the National Tournament, where Torrey was named the team's MVP after leading them to a bronze medal. At The Hotchkiss School in Connecticut, Torrey led the hockey team in scoring. He was recruited by the University of Vermont to pursue his academic interests and passion for hockey. In his junior year he was named their team captain, as well as being top scorer and team MVP. In 2004, Torrey was drafted by the NHL's San Jose Sharks. In 2007, he made the roster in his rookie year.
He was named the "Sharks Rookie of the Year" in 2007-08. Be set by injuries in his second and third years, he has demonstrated tremendous resilience and determination to return to the Sharks lineup. Torrey is entering his fifth year the NHL. 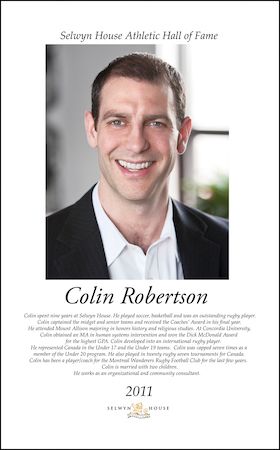 Colin spent nine years at Selwyn House. He played soccer, basketball and was an outstanding rugby player. Colin captained the midget and senior teams and received the Coaches' Award in his final year.
He attended Mount Allison majoring in honors history and religious studies. At Concordia University, Colin obtained an MA in human systems intervention and won the Dick McDonald Award for the highest GPA. Colin developed into an international rugby player. He represented Canada in the Under 17 and the Under 19 teams. Colin received 7 full senior men's international caps. He has been a player/coach for the Montreal Wanderers Rugby Football Club for last few years.
Colin is married with two children. He works as an organizational and community consultant. 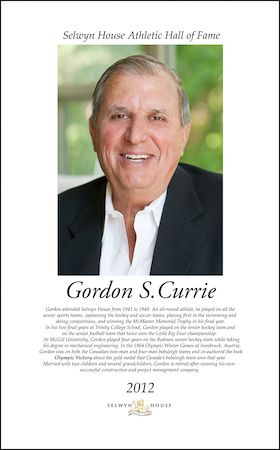 Gordon attended Selwyn House from 1941 to 1949. An all-round athlete, he played on all the senior sports teams, captaining the hockey and soccer teams, placing first in the swimming and skiing competitions, and winning the McMaster Memorial Trophy in his final year.

In his two final years at Trinity College School, Gordon played on the senior hockey team and on the senior football team that twice won the Little Big Four championship.
At McGill University, Gordon pla four years on the Redmen senior hockey team while taking his degree in mechanical engineering the 1964 Olympic Winter Games at Innsbruck, Austria, Gordon was on both the Canadian two-man and four-man bobsleigh teams and co-authored the book Olympic Victory about the gold medal that Canada's bobsleigh team won that year.

Married with two children and several grandchildren, Gordon is retired after running his own successful construction and project management company. 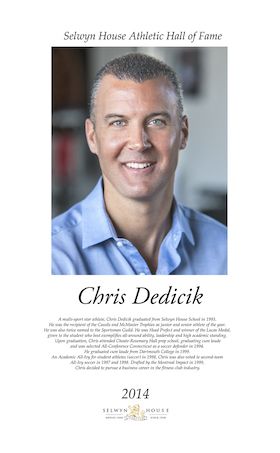 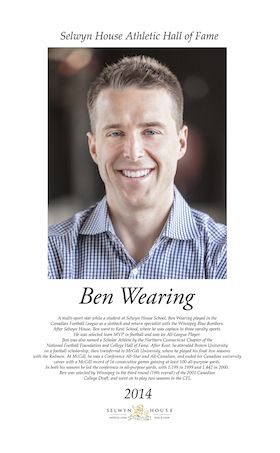 A multi-sport star while a student at Selwyn House School, Ben Wearing played in the Canadian Football League as a slotback and return specialist with the Winnipeg Blue Bombers. After Selwyn House, Ben went to Kent School, where he was captain in three varsity sports.
He was selected team MVP in football and was an All-League Player.
Ben was also named a Scholar Athlete by the Northern Connecticut Chapter of the National Football Foundation and College Hall of Fame. After Kent, he attended Brown University on a football scholarship, then transferred to McGill University, where he played his final two seasons with the Redmen. At McGill, he was a Conference All-Star and All Canadian, and ended his Canadian university career with a McGill record of 16 consecutive games gaining at least 100 all-purpose yards In both his seasons he led the conference in all-purpose yards, with 1,199 in 1999 and 1,442 in 2000. Ben was selected by Winnipeg in the third round (19th overall) of the 2001 Canadian College Draft, and went on to play two seasons in the CFL 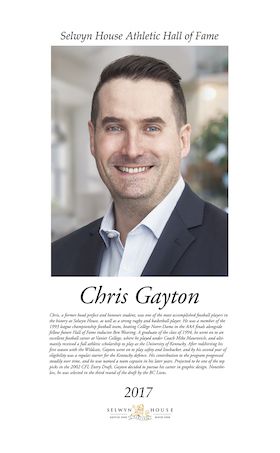 Chris, a former head prefect and honours student, was one of the most accomplished football players in the history at Selwyn House, as well as a strong rugby and basketball player. He was a member of the1993 league championship football team, beating Collège Notre-Dame in the AAA finals alongside fellow future Hall of Fame inductee Ben Wearing. A graduate of the class of 1994, he went on to an excellent football career at Vanier College, where he played under Coach Mike Maurovich, and ultimately received a full athletic scholarship to play at the University of Kentucky. After redshirting his first season with the Wildcats, Gayton went on to play safety and linebacker, and by his second year of eligibility was a regular starter for the Kentucky defence. His contribution to the program progressed steadily over time, and he was named a team captain in his later years. Projected to be one of the top picks in the 2002 CFL Entry Draft, Gayton decided to pursue his career in graphic design. Nonetheless, he was selected in the third round of the draft by the BC Lions. 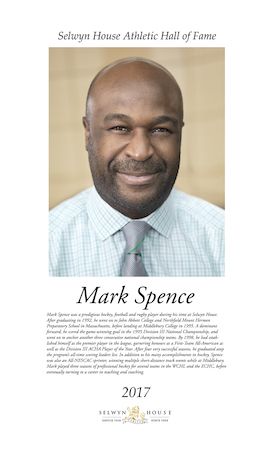 Mark Spence was a prodigious hockey, football and rugby player during his time at Selwyn House. After graduating in 1992, he went on to John Abbott College and Northfield Mount Hermon Preparatory School in Massachusetts, before landing at Middlebury College in 1995. A dominant forward, he scored the game-winning goal in the 1995 Division III National Championship, and went on to anchor another three consecutive national championship teams. By 1998, he had established himself as the premier player in the league, garnering honours as a First-Team All-American as well as the Division III ACHA Player of the Year. After four very successful seasons, he graduated atop the program's all-time scoring leaders list. In addition to his many acca in hockey Spence was also an All-NESCAC sprinter, winning multiple short-distance track events while at Middlebury
Mark played three seasons of professional hockey for several teams in the WCHL and the ECHC, before eventually turning to a career in teaching and coaching. 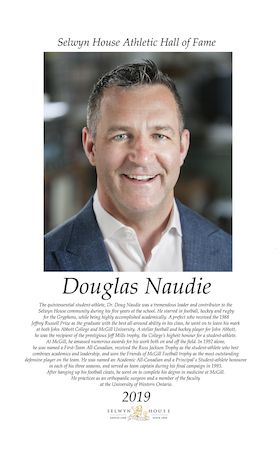 The quintessential student-athlete, Dr. Doug Naudie was a tremendous leader and contributor to the Selwyn House community during his five years at the school. He starred in football, hockey and rugby for the Gryphons, while being highly accomplished academically. A prefect who received the 1988 Jeffrey Russell Prize as the graduate with the best all-around ability in his class, he went on to leave his mark at both John Abbott College and McGill University. A stellar football and hockey player for John Abbott, he was the recipient of the prestigious Jeff Mills trophy, the College's highest honour for a student-athlete.
At McGill, he amassed numerous awards for his work both on and off the field. In 1992 alone, he was named a First-Team All-Canadian, received the Russ Jackson Trophy as the student-athlete who best combines academics and leadership, and won the Friends of McGill Football trophy as the most outstanding defensive player on the team. He was named an Academic All-Canadian and a Principal's Student-athlete honouree in each of his three seasons, and served as team captain during his final campaign in 1993.
After hanging up his football cleats, he went on to complete his degree in medicine at McGill.

He practices as an orthopaedic surgeon and a member of the faculty at the University of Western Ontario. 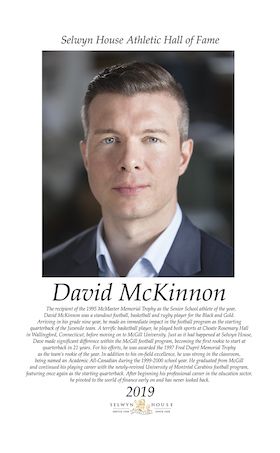 The recipient of the 1995 McMaster Memorial Trophy as the Senior School athlete of the year David McKinnon was a standout football, basketball and rugby player for the Black and Gold.
Arriving in his grade nine year, he made an immediate impact in the football program as the starting quarterback of the Juvenile team. A terrific basketball player, he played both sports at Choate Rosemary Hall in Wallingford, Connecticut, before moving on to McGill University. Just as it had happened at Selwyn House, Dave made significant difference within the McGill football program, becoming the first rookie to start at quarterback in 21 years. For his efforts, he was awarded the 1997 Fred Dupré Memorial Trophy as the team's rookie of the year. In addition to his on-field excellence, he was strong in the classroom being named an Academic All-Canadian during the 19992000 school year. He graduated from McGill and continued his pla career with the newly-revived University of Montréal Carabins football program, featuring once again as the starting quarterback. After beginning his professional career in the education sector, he pivoted to the world of finance early on and has never looked back