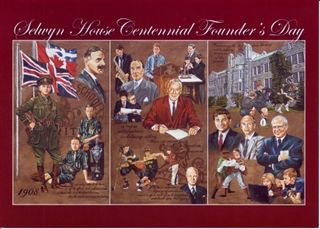 In 1908, Lieutenant Algernon Lucas, a graduate of Selwyn College, Cambridge University, arrived in Montreal from England in pursuit of a teaching career. In response to the need of Montreal’s English community for a suitable preparatory school, he was entrusted with the early education of seven young boys. The venture grew rapidly, and within two years, Lucas School had to move to a larger private house on Mackay Street. In 1912, Mr. Lucas turned to the business world and transferred the School to Mr. Colin Macaulay, a fellow graduate of Selwyn College, who re-named it Selwyn House, in honour of their alma mater.

By 1920, Selwyn House had again outgrown its premises and was divided into a senior section on Mackay Street with the junior section at Mr. Macaulay’s residence nearby on Sherbrooke Street. In 1929, Mr. Macaulay retired to England, and Mr. Geoffrey Wanstall became proprietor. His first step was to acquire larger premises on Redpath Street, which were expanded to include a proper library, a gymnasium, a dining room, and an assembly hall.

In 1961, Westmount High School moved to a new site and put its old premises at 95 Cote St. Antoine on the market. The Selwyn House directors purchased the property and moved the school to its present site. Over the years, a new dining room and kitchen were provided, science laboratories were reconstructed, the gymnasium enlarged to twice its original size, two new wings added, and part of the superintendent’s house next door converted to classroom space.

The steady growth of the school and the demands for added facilities reached a point at which no further expansion of the existing premises was possible. When St. Andrew’s United Church, opposite the school, closed in 1985, Selwyn House purchased the property. The former church building was renovated to include an additional gymnasium, as well as offices and classrooms. The school’s original building was designated as the Lucas Building, and the former church building as the Macaulay Building.

In 2002, the need again arose to expand facilities within the available space, prompting the school to undertake a two-phase $12.5-million construction and renovation project to increase the school’s indoor space by 38 per cent. The project included construction of a new building—the Speirs Building—housing a new state-of-the-art library and learning centre, computer labs, and a new full-size gymnasium, as well as administrative offices. A tunnel running beneath Stanton Street now connects this new building to the Macaulay Building, while the 67-year-old Lucas Building, home of the Elementary and Middle Schools, has been extensively renovated and modernized.